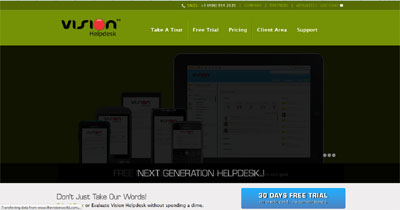 What it does:
Vision Helpdesk product is 5 year’s young and currently its 3rd version that we have released. During those 5 years Vision Helpdesk has greatly evolved — The new version V3 we call it as Next Generation Helpdesk.

Vision Helpdesk starts at just $24 per month SaaS Based (Installed on our Cloud Server) Version and $599 one time for Download (Install on Your Server) Version. Both SaaS and Download Licenses offers UNLIMITED STAFF, USERS and TICKETS.

How it beats the competition:
Vision Helpdesk is the only web-based helpdesk software that allows you to manage support for multiple companies at one place. With single front-end and each company having its own client portal makes it true satellite helpdesk.

The ALL IN ONE customer support helpdesk allows you to manage various channels like E-MAIL, WEB-FORMS, TWITTER, CALLS everything under single roof.

Web-based Helpdesk Software - Vision Helpdesk, 8.4 out of 10 based on 24 ratings

Next post: People Doing Strange or Everyday Things – Look at Your Kids