BigDeal lets users purchase virtual bids $0.75 each which can then be used to bid on goods ranging from video games to high-end televisions. Whenever you bid on an item, its price increases by $0.15 and an extra 30 seconds are tacked on to the duration of the auction. With this model, items end up selling substantially below their market value. But one of the main criticisms of Swoopo was the risk of losing your money spent on bids (regardless of whether you win or not) when the auction concludes. BigDeal takes a couple of steps to mitigate this risk.

That’s not all. BigDeal provides an added incentive for bids by letting all users trade in the money they spent on bids for gift cards. All users get $1 gift card discount for every $1 spent on bids. So if you buy $25 in bids, BigDeal will give you a $100 gift card for $75. 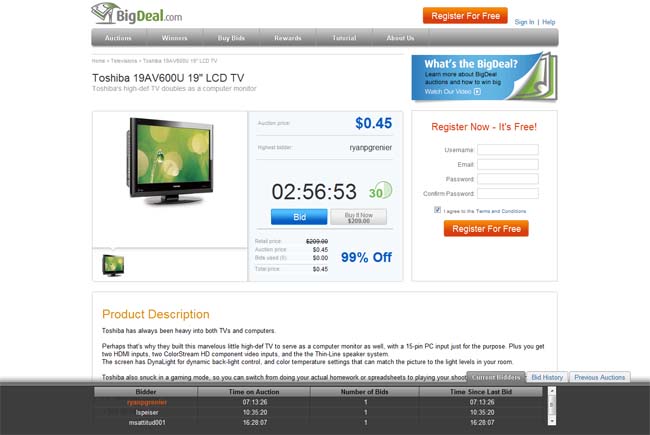 Next post: Reedge – Onsite Behavioral Targeting Software as a Service