Find out the Best Street in – Beststreet.In 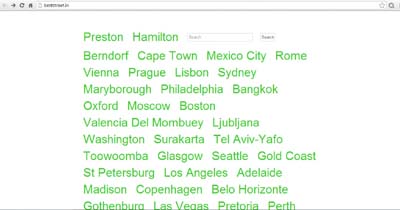 What it does:
I got the idea, when I stopped off in Ottawa for a few hours.

I hated Ottawa, I still maintain it’s the worst city in the world. Later on, we read in the guide book that we’d visited the worst street in Ottawa.

Anyway… so I built this thing.  It’s super simple, basically just a user curated list of streets within a city and with a few Instagram shots.

It could be the best street because it’s beautiful, or because it has an awesome nightlife, or just nice cafes, or whatever… Users can fight that out…

Users don’t need to sign up, they just hit thumbs up, or down. You can add a street at the bottom of the page, type in the name and hit add, google will do the rest.