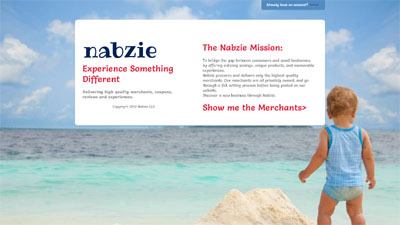 What it does:
Nabzie provides coupons/deals to consumers in a format that is unlike any other deal marketplace in the industry.
We have taken standard coupons and interlaced daily deal methodologies.

How it beats the competition:
Nabzie’s business model benefits both merchant and consumer. Merchants are charged one flat rate for advertising their coupon/deal. Consumers are presented a coupon allowing them to pay only upon use. Savings are of 40% or more, which is comparable to major deal sites in the market. Consumers are now interacting with the merchant if there is a problem/dispute. No longer does the merchant point the finger back at the daily deal marketplace.
Since merchants are not paying high commissions rates, they get the full discounted amount.