OpinionAuto is a site in which car reviews are aggregated and presented back to the users for everybody to delve upon. Some of the sources that are indexed include Car Gurus, MSN Autos, AOL Autos and Drive. These reviews and opinions can be looked up in a plethora of ways, as you can key in the name of any car model that appeals to you or click on the most popular cars which are displayed on the main page and proceed from there. Besides, these vehicles that have been reviewed as of late are gathered together in the main page for you to see which models are being considered the most by the buying public.

Buying a vehicle or upgrading to a new one is never far from our minds, and the share of activity which is seen on this website makes it all too clear. I am little surprised that there s not an option that lets you see these automobiles that have received the best ratings so far, and I hope that is addressed in due time. Other than that, the site does it bit more than satisfactorily enough – it is concise and to-the-point, and the layout is unequivocal. 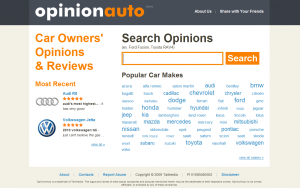