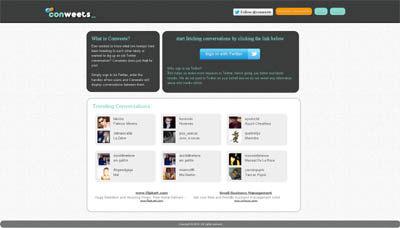 What it does:
In a nutshell, a conversation finder. But in truth, its much more that that! Digging through the conversations between two people on twitter has always been a task requiring moving back and forth between pages involving many clicks. It was because of this reason development started on Conweets, a site with an elegant, easy to use interface, providing conversations taking place on twitter.

How it beats the competition:
It has an easy to use UI. It also lets you track conversations from about 3200 recent tweets instead of tweets which are only a week old

Twitter Conversation Finder - Conweets, 9.3 out of 10 based on 3 ratings