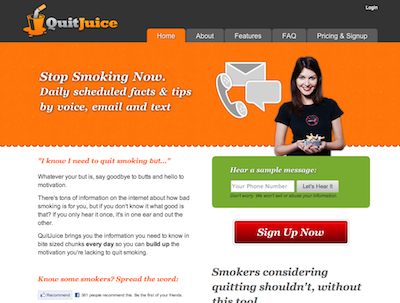 QuitJuice is: Powerfully motivating facts, tips, and encouragement to quit smoking delivered to you fresh daily by voice, email, and text.

How it beats the competition:
We come to you where you are instead of making you come to us.

QuitJuice empowers by informing you a little every day so you can keep on track.

You don’t need a smart phone, or even a computer to use it once it’s set up.

Great to use alongside any/all other smoking cessation products.