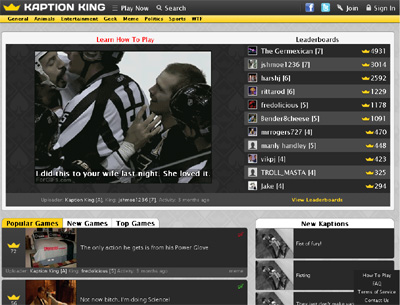 What it does:
Kaption King is a online caption contest game within in a funny media site and community.

Challenge friends and strangers to a constant game of one upping each other. Utilize strategy with the perks system to support friends and fend off opponents. The goal is to gain a reputation by amassing points, profiles, and followers.

Share creativity and great media all at the same time. It’s a challenging game of wit.

How it beats the competition:
This is the first platform to bring a competitive gaming element to caption contests.There are special features and abilities that add a strategic element to the captioning process. The content is innately viral and users can share their witty captions with friends via Facebook and Twitter.

The Ultimate Caption Contest - Kaptionking.com, 9.0 out of 10 based on 1 rating